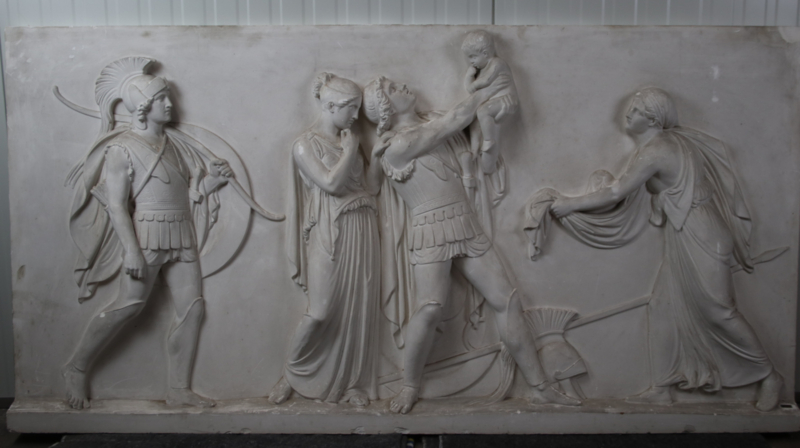 This plaster casting is a rare one-on-one,  made at the end of the 19th century, straight the original that can be seen in the Thorvaldsen Museum in Copenhagen and was cast by the museum itself.

The bronze plate 'Thorvaldsen Museum' is attached to the bottom right of the relief.The cast is made on a steel frame to prevent breakage. A particularly rare, fragile and - except for a few small chips - perfect specimen.

Originally intended as a study object for an art academy and a beautiful object on your wall.

Thorvaldsen (1770 - 1844) was an influential representative of neoclassicism and one of the most important exponents of the Danish Golden Age. His work was strongly inspired by the sculptures of classical antiquity. He worked on behalf of European royal houses like Napoleon Bonaparte and the Romanovs

This scene comes from Homer's Iliad, Book 6, verses 399-493, where the Trojan prince Hector says farewell to his son Astyanax and his wife Andromache to go to war against the Greeks who besieged Troy.

Free delivery within the Netherlands. Viewing by appointment.